About one hundred and fifty people gathered in the Plaza Francisco Rabal for the assembly of the residents of Alpedrete.
The assembly commenced with the proposals that are being debated and reviewed in Sol (see pertinent web pages) in order to examine the current situation and functioning of the 15 May Movement regarding the transmitting and participation via Internet, as well as the programming of assemblies and concentrations.
The main points are as follows:

Other proposals that were not followed by a consensus and which will be included in the following assemblies are:

The assembly ended at 14.14. The next assembly will take place SUNDAY JUNE 5th, AT 12, IN THE PARQUE DE LAS COLUMNAS. 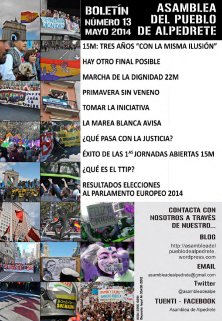 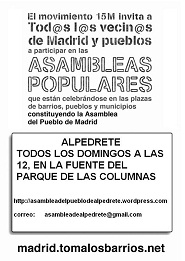